I'll stop talking about VW sometime, but after all... this is my blog...

Today, I'm just gonna write about what I want... The past few weeks I've been trying to sit down and write a really concise essay on safety features available on modern cars and how they're making us lazy and irresponsible. I've started it three or four different times but I can't seem to make myself get down to it though it is a topic I have pretty strong feelings and pretty big thoughts on. This post is going to be about something else near and dear to my heart... Volkswagen.

In my previous post I've talked about my admiration for the brand and what Volkswagen has done for me, the freedom (and the frustration) they have granted me. So here is an earful on VW, the brand, the myth, the legend

Born September 5th 1875, in then Maffersdorf, Bohemia in Austria-Hungary, now Vratislavice nad Nisou, Czeck Republic; Ferdinand Porsche was born to Anna and Anton Porsche, being their third child. He was a bit a tinkerer early on and proved to be a bit of a wiz-kid by 13, installing electric doorbells and eventually electric lighting in his parents home by 16. He wound up in Vienna as a student at what is now The Vienna Technical Institute and a job at a local electrical company, working whenever he was in class. His father being a "panel-beater" and having a shop of his own, Ferdinand was regularly exposed to early automobiles by his teenage years as well. This seems to be where the of the obsession began, it wouldn't be long for little Porsche to get his own wheels turning down the road of "Automotive Legend".

By 1906 Ferdinand was hired by Austro-Hungarian automaker, Austro-Daimler as their Chief Designer. Ferdinand was a having a grand old time designing cars on these guy's dimes. Then 1916 comes right around, the first World War in full swing at this point and our pal Ferdinand earns himself an honorary doctorate from the College of Technology in Vienna. Our man is a Doctor now! 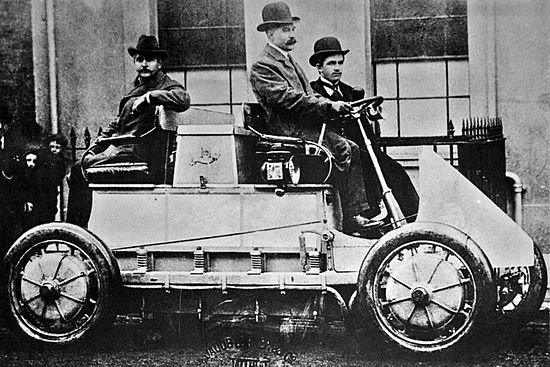 The Lohner-Porsche Mixte Hyrbid (Circa 1901)

He had also drawn up and developed some fresh technologies on his own time, including the world's very first hybrid automobile that was breaking Austrian speed records at the time- we're talking 35 miles per! Get that! 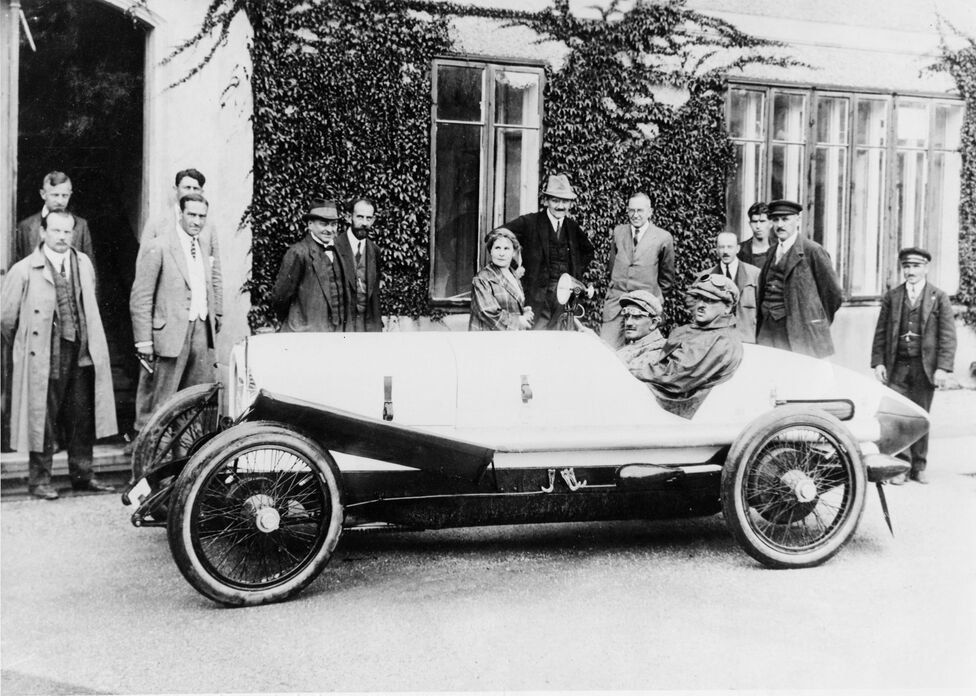 Okay, I'll cut the satire, this new hybrid whip wasn't exactly burning rubber but it was undoubtedly revolutionary. Besides, our man Ferdinand was building some sporty two-seater carts to fulfill his tireless need for speed.

1923 comes rolling around and our boy Ferdi recognizes that's it's time to wave the stiffs at Austro-Daimler "Auf Weidersehen". At this point he took off to Stuttgart, Germany to work for Daimler as their Technical Director. While there he received another honorary doctorate from the Stuttgart Technical Institute and he dreamt up some really fabulous, very successful racing cars for Daimler. After a few company mergers (Daimler joining forces with Cie-Benz to create Daimler-Benz) our mustached doctor finds himself looking to work for another automobile firm after a falling out with the board of Daimler-Benz over plans for a small, light-weight sports car. This concept would eventually become the sole focus of Dr. Porsche's vision and would be the basis of his future companies efforts.

It's the early spring of 1931 in Stuttgart, Germany, the birds are chirping, the flowers are blooming and Dr. Porsche was opening up his very own automotive consulting firm. And in proper German fashion, it had overly complicated name:  Dr. Ing. h.c. F. Porsche GmbH, Konstruktionen und Beratungen für Motoren und Fahrzeugbau. And for those not privy to the beautiful German language: Dr. Ing. h.c. F. Porsche GmbH,  designs and consulting services for motors and vehicles. With his own firm now open and properly staffed he got right down to business designing vehicles for German brands such as Wanderer, Zundapp and NSU and finding very good success at all of that. But the Doctor always made sure he had some left over time each day to design and develop his own autos for his own production. 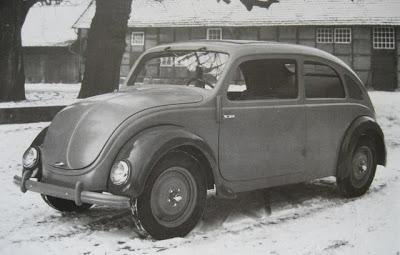 This is where things get a little shady all thanks to a little known group of Germans so-called, "The National Socialist German Worker's Party". Kind of a mouthful, I know. We'll just call them the Nazis. 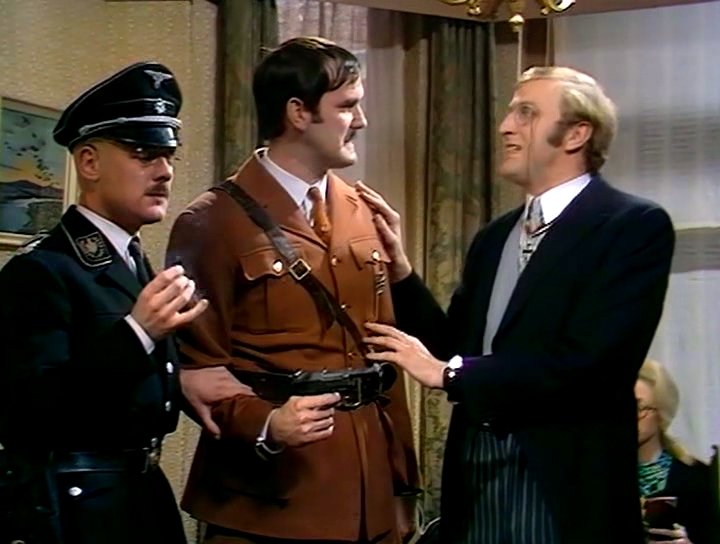 It's 1933 and Germany is firmly under Nazi control, Adolf Hitler was made Chancellor of Germany in January 30th, 1930. Right away Mr. Hilter had a vision to mobilize Germany and he had a man in mind to help him do it: Dr. Porsche. It's important to remember that at this point Germany was still financially destitute. Only one in every 50 Germans owned a car and many of them still, couldn't have even afforded a motorcycle. BUT- The Nazi folk had a plan to get their citizens moving and much like their other plans, it was utter shit.

As a part of "Kraft durch Fruede" (Strength Through Joy), a leisure program created by the Nazis to help promote fun in the Fatherland, ultimately a program to further indoctrinate the German people and fund the Nazi machine, the citizens of Germany would collect stamps by purchasing them regularly and adding them to their stamp books. When their stamp books were filled up, they'd be sent off to Berlin and you'd get your car, your very own Volkswagen. 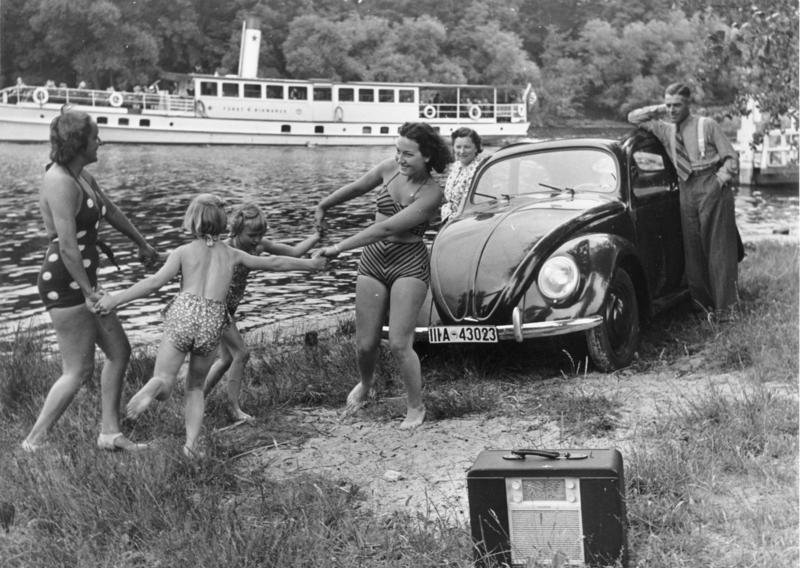 So- each week you'd send in a nice bit of your paycheck to Berlin and in return you'd receive your very own KdF-Wagen, sounds like a dream. To answer the question that I know is on your mind dear reader- out of the hundreds of thousands of KdF stamp books completely filled by those with dreams of the open road, romping down the Autobahn with The Scorpions cranked on the stereo, impatiently waiting for their Beetle, all while, ultimately, supporting Nazi war machine, not a single one of those poor souls received a car. Not a single KdF-Wagen was delivered to any single family apart from a couple that had been made for Nazi party officials... Even the angry man with the bad mustache himself had a convertible Beetle delivered to him in 1938.

Only a hand full of Beetles were produced directly before the second world war. The factory in Wolfsburg that was built to build the very first "People's Car", ended up being used to manufacture other Porsche designed vehicles, though these that were made, were a bit more... let's say, utilitarian. Schwimmwagens, Kubelwagens and other Nazi mobiles were built here to supply the German war machine.

Anyhow, post war; production of the Beetle and Dr. Porsche were now under the careful watch of the Allies. Due to the Morgenthau Plan, production of the Beetle must be 10 percent of it's production number of 1936. It wasn't just Porsche that got the axe- NSU, Auto Union, BMW, Mercedes Benz, any German Automobile manufacturer had to meet the ten percent regulation, among many others.

From there the rest is history, truly. Dr. Porsche created the Porsche brand after leaving the Volkswagen group to do its thing .The Beetle became a cultural icon because of some hippies that were too high to realize that it was terrible. The Type 2 could move an entire gaggle of Dead Head hippies that were too high to realize that the Grateful Dead were (and still are), terrible as well. VW became a legend it's self, truly became apart of American pop culture, an icon of a time now gone. The Summer of Love, Woodstock, other hippie nonsense, VW made it all groovy. 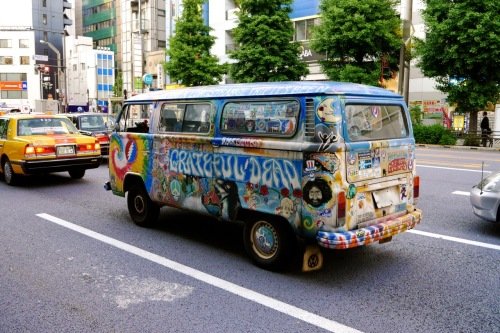 To end, VW has improved their reputation since the war. Most importantly; dropping the Nazi nonsense, thankfully. Though their future is looking a whole lot more electric, no doubt Volkswagen will continue to set trends and produce some truly unique vehicle. And, of course, continue to lie to people (see the "Volkswagen Emissions Scandal" [better known as "Dieselgate"] Wikipedia page). Despite the hippies and the lies, VW and Dr. Porsche- well their vehicles anyways, will always hold a special place in the hearts of many people, mine included...

And we haven't even talked about Porsche yet...